DearVivian,  whilst we don’t generally provide market commentary during the month, given the extreme volatility that the digital currency market has experienced in the past week we wanted to provide an update on the Portal Digital Fund’s mid-month estimated performance and some insight into the drivers of the correction.

According to mid-month estimates provided by our underlying funds, the PDF is up around 3%, with the majority of the underlying hedge funds that the PDF invests in are flat to slightly positive, whilst our long volatility and momentum funds are up 8% and 3.5% respectively. This is in line with our capital preservation strategy that seeks to ensure that the PDF is flat in times of large market drawdowns as our allocations to market neutral, momentum and long volatility funds provide protection.

Bitcion (BTC) has rallied from $17,000 in December to a high of $63,600 in mid-April. This is almost 280% in less than six months. Although we don’t trade any digital currencies directly for the Portal Digital Fund we do position the fund from a portfolio construction perspective to either be longer or shorter both Beta and volatility. We have been reducing both since April.  A frequent topic of our investment committee meetings has been that the markets (and BTC specifically) are due for a large retracement, at least back to support of around $40,000. This level of retracement is normal for any asset class in the midst of a six-month bull run, and especially for BTC as a higher volatility asset.

Currently, Bitcoin (BTC) is down 32% MTD from where it opened in May at $57,700 to where its currently trading at $39,000 as of the time of writing. Technically, BTC battled to break through the $39,250 level at the beginning of February and then broke through convincingly on the 8th of February to close up strongly at $46, 440. That resistance is now a real support and we believe that if BTC holds this $39,000 level it will rebound quite strongly to retest previous highs in Q3 2021 as the bull channel is intact.

2. Dispersion of Returns: Differentiation in BTC vs DeFi vs NFT’s.

It must be noted that initially as BTC fell as much as 20% many of the DeFi tokens were flat and even up. This, in our opinion, is a sign of the maturation of the digital currency markets. We do believe as a second-order liquidity effect that the eventual sell-off in Ethereum(ETH) and related DeFi tokens was inevitable and they have also sold off in the past 24 hours. The dispersion around returns does provide a lot of opportunity for the various hedged strategies we invest in, most notably arbitrage, spread trading and momentum funds.

BTC’s sell-off has been blamed on Elon Musk’s reversal in his support for the digital currency as not only a store of value but also as a means of transacting with Tesla. His recently undisclosed concerns over its use of electricity need to be placed in context as Google’s search engine and email uses more than double BTC’s energy on a daily basis. It should also be noted that the majority of Tesla’s profits come from the sale of carbon credits to other auto manufacturers that are not selling Electric Vehicles and also more recently from the rally in BTC that they acquired a few months ago. This is not high-quality earnings.

Incidentally, Tesla recently reported that have produced more than 10,000 electric vehicles reportedly that are on hold because of a missing part, creating what a report called a “logistical nightmare” for the EV giant. For an auto manufacturer valued at a 250X forward PE (much higher if you strip out the rebates for the sale of carbon credits – closer to 380X), BTC should be the least of his trepidations.

In contrast, Galaxy Digital published a report last week entitled “On Bitcoin’s Energy Consumption: A Quantitative Approach to a Subjective Question.” The authors described, “This report took a quantitative approach, comparing Bitcoin’s energy usage to that of other industries.” Within the report was an energy consumption comparison between the banking system, gold, and bitcoin.

According to the report, the Bitcoin network consumes an estimated 113.89 TWh/yr in total. While the report estimates that the gold industry utilizes roughly 240.61 TWh/yr, it says that the banking system consumes the most energy. In conclusion, the report highlights bitcoin’s features that can offer financial freedom to people worldwide.

Moreover, “The network can benefit the energy sector by creating perfect use cases for intermittent and excess energy. And the network will only scale further if network adoption warrants it.” Emphasizing that “Energy utilization is not necessarily a bad thing,” the authors noted that “Humans will continue to find new technologies that require more energy that challenge the status quo. Bitcoin is yet another example.”

They then revisited the original question: Is the Bitcoin network’s electricity consumption an acceptable use of energy? Their answer is definitive: yes. The new is displacing the old and if anything, the growth in cryptocurrencies globally is a strong motivation to create more solar and sustainable energy. For an excellent overview and understanding of how irrelevant the energy argument is, watch this short clip by Michael Saylor on the Bitcoin Environment Argument here. It’s really worth the 8 minutes of your time.

A bigger factor that we believe is fuelling the selloff in crypto markets is this factually incorrect report by Reuters on an update by the Chinese government, which unfortunately demonstrates the lack of depth and integrity we can have come to expect from mainstream news agencies these days:

“China has banned financial institutions and payment companies from providing services related to cryptocurrency transactions and warned investors against speculative crypto trading. It was China’s latest attempt to clamp down on what was a burgeoning digital trading market. Under the ban, such institutions, including banks and online payments channels, must not offer clients any service involving cryptocurrency, such as registration, trading, clearing and settlement, three industry bodies said in a joint statement on Tuesday:

“Recently, crypto currency prices have skyrocketed and plummeted, and speculative trading of cryptocurrency has rebounded, seriously infringing on the safety of people’s property and disrupting the normal economic and financial order,” they said in the statement.”

We note that three questionable things occurred to people that think objectively and without sentiment:

2) People retweeting Reuters headlines and believing it without doing any independent research. (Or thinking it seems)

3) Market crashing on the Reuters news.

China didn’t just “ban crypto”. It’s just reiterating an anti-speculation law from years ago. It has not barred individuals from holding cryptocurrencies. This a classic case of “Reflexivity”, which refers to the self-reinforcing effect of market sentiment, whereby falling prices attract sellers whose actions drive prices lower still until the inevitable collapse in prices occurs, whereby smart, longer-term investors step in and stabilise prices.

We see in this case that unfortunately, bad news begets bad news (Musk, Coinbase investigation, China) and as the price falls further technical levels are broken and more selling occurs. The longer-term structural investment case for BTC is very much intact. This is even more relevant when it comes to DeFi tokens.

The bull case for both cryptocurrency adoption and investment remains firmly intact and this is a natural part of the cycle, especially for an asset that exhibits such high volatility. We choose our underlying funds very carefully and ensure that they understand that their risk management is as core to their investment proposition as their returns are. All our funds are hedged and our current portfolio positioning is 28% market neutral, 17% momentum, 18% long volatility, and 35% in DeFi of which around half is in trading strategies and half in fundamental longer-term investments. Our Beta is around 0.2 and we will be looking to increase both our Beta and overall market exposure in the next round of allocations, as we expect the markets to rebound in the coming months and the PDF to enjoy another rally when they do.

Volatility as depicted by the chart below, is not risk, its opportunity. Real risk is risk of permanent capital loss, like the fixed income and equity markets are about to experience as inflationary expectations rear up.

Our virtual event program will be in the form of a discussion and presentation moderated by Mr Mark Witten, Director of Portal Asset Management followed by 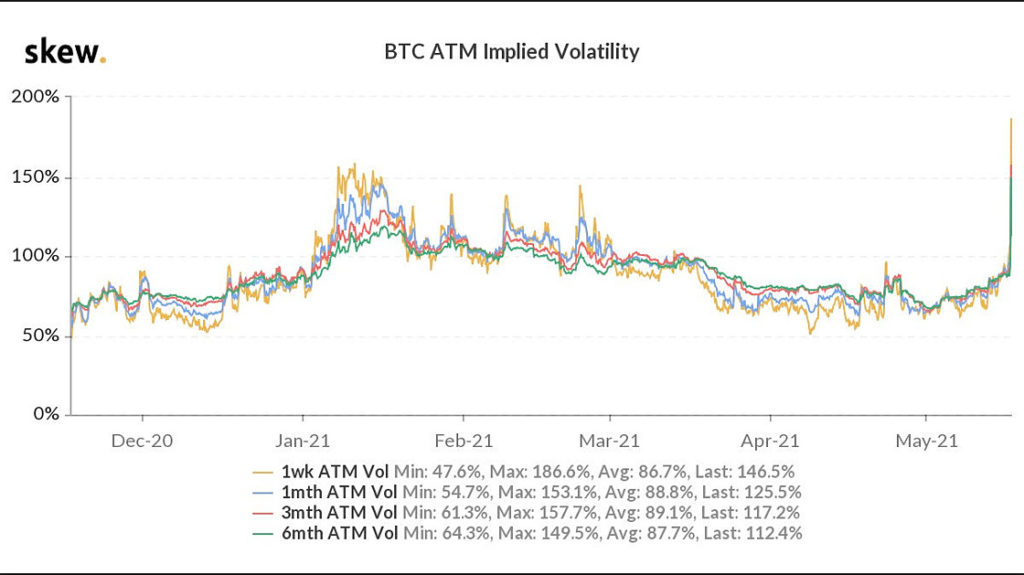